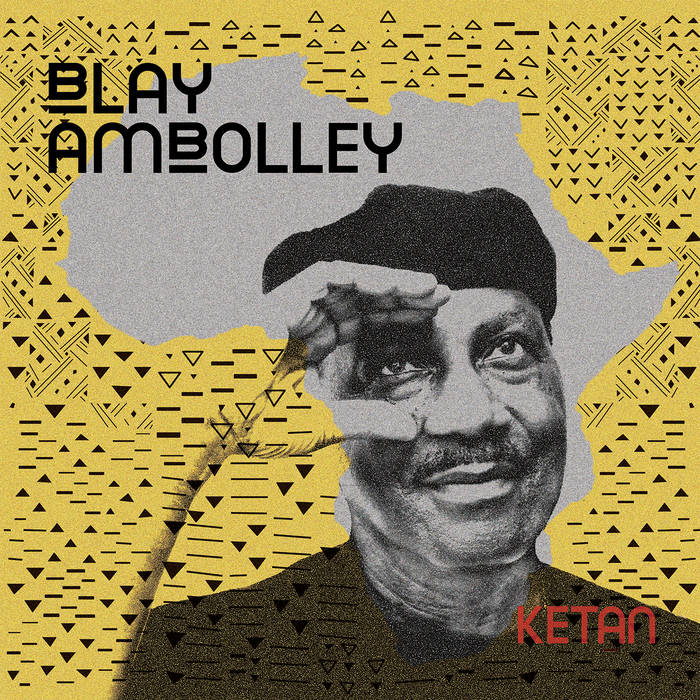 grzegbakowski A brilliant artist whose music is paradise.

nicholas hamnett ..."What is a-happening? What is going on?" Well, I'll tell you, Blay, it's you! and as soon as my vinyl copy of Ketan arrives I'll be doing your music full justice by playing it on my faithfull Bang and Olufsen, circa 1968, which is still going strong, and which, for warmth of sound, makes this digital android experience I'm having with you right now seem like the band's very cool rehersal to the forth coming better heated gig!

This album is more hynotically Fela Kuti in beat than, say, the looser, Simigwa or Blay Ambolley's super DJ friendly EP, The Message, which is so wonderfully heavy on bass you feel, on listening to it that you've been rung like a bell.

If Blay Ambolley hadn't been a singer (and thank goodness he is) he could easily have lent that deep, authoritative voice of his - reminiscent at times of Barry White - to the BBC's World Service, becoming, perhaps, the coolest news reader of them all! But it's the music for him which spreads the news, and the first track on Ketan is Blay Ambolley at his most political, drawing a further comparison to the, generally, more combative Fela Kuti, whose lyrics appear on the track Teacher.

A bigger, jazzier, band sound than the other albums I have of his, but thankfully no change in the superb quality of the music.

I would talk about the technicalities of the music, but I know little of that, as I'm one of those who can write a song, but haven't the foggiest notion about theory, notation, or actually much beyond the chords I play and I can't always give a name to them! I can tell you this music is infectious, and that the drumming makes this album something of an an Afrobeat incantation.There are some lovely instrumental interludes too, especially from the sparkling keys of Isaak Karikari.

There are amusing cat-like noises, cackling, and scatting, for those who enjoy the playful side of Blay Ambolley.

But my comments are, in the end, simply mood-music on how to spent twenty quid, wisely; and If that means a bit more loose change for Blay Ambolley, I'd say, on the strength of this, he more than deserves it.

* UPDATE: The album sounds awesome on vinyl!.I rate this as equaling the best of Fela Kuti! A classic! Favorite track: Afrika Yie.

Music Without Labels I am driven to hear new music, or music I have not heard before. It keeps me and this thing we call the 'scene' fresh. This album makes me smile and every track is quality!!
more...

The Legendary Gyedu Blay Ambolley from Ghana, West Africa and his Sekondi Band has 29 music albums to his credit. "Ketan" is his number 30.

Ambolley was born in the city of Sekondi-Takoradi (an area called Ketan), in the Western Region of Ghana, in West Africa. The multi-talented, International, Ghanaian Musician celebrated his "Silver Jubilee" in music in 1998.

Ambolley taught himself to play the flute as a first instrument in his early years of musical interest dating back to the age of eight, when he began playing with his father's flute. The young music enthusiast continued to learn the rudiments of music from the late' Sammy Lartey and Ebo Taylor. During the sixties, the young aspiring musician was impressed with the music he heard on the popular radio show, "Voice of America Jazz Hour." That sixties show featured such jazz giants as Jimmy Smith, Max Roach, Wes Montgomery, Charlie Parker, Clifford Brown, Miles Davis, John Coltrane, Ella Fitzgerald and Billie Eckstie... all of whom became part of Ambolley's early musical experience.

This versatile, irrepressible singer, songwriter, producer and "musical- life-force" exploded on the music scene in 1973 with a jazzy highlife sound called 'SIMIGWA-DO'.

He has toured throughout West Africa, Europe, Canada, and the United States and has performed on the same stage with some of the world’s most celebrated artistes such as; Miriam Makeba of South Afrika, the late Fela Anikulapo-Kuti of Nigeria, the late George Howard, Angela Bofill, Norman Connors, Manu Dibango, Lakeside, Chikuzan Takahashi of Japan, Ricardo Estrada of Cuba, Mayuto Correa of Brazil and toured Ghana with Oscar Brashear and Michael Session.

The celebrated musician has received numerous prestigious awards, for example a lifetime achievement award and Inducted into the music hall of fame by Charles R. Drew University of Medicine and Science in California and an award from the Board of Supervisors and the City Council of the State of California for bridging the gap between Africa and African American music. He also received a lifetime achievement award at the Ghana Music Awards in 2013.

Gyedu-Blay Ambolley has crafted the ability to combine a unique sound and melody with funny lyrics and dancing to his music as is well documented that "the genre of his music is entertainingly elevating and spiritually inescapable”, such that its uniqueness transcends all musical categories.

The Legendary Gyedu Blay Ambolley from Ghana, West Africa and his Sekondi Band has 29 music albums to his credit. He was born in the city of Sekondi-Takoradi, in the Western Region of Ghana, in West Africa. This versatile, irrepressible singer, songwriter, producer and "musical-life-force" exploded on the music scene in 1973 with a jazzy highlife sound called 'SIMIGWA-DO'. ... more

Bandcamp Daily  your guide to the world of Bandcamp